Those who have read my last two blog posts may realise a trend forming after having read this one: I love complaining about Germany. However, with each and every complaint that I put to my German friends, it seems each one of them finds that, in some ways, it rings true. Well, either that or they fail to agree simply because they don’t understand what it’s like when you’re used to things being better.

Why aren’t shops open on Sundays?

Why don’t you just go shopping on other days?

Why does everyone have to carry around a state-issued ID card? I enquire. The Ausweis is only a small bit of card, and don’t you mostly take your wallet out with you anyway? They retort, missing the point. Perhaps it seems like I hate Germany, but I don’t – maybe it’s my way of coping with the things I see as being more complicated than they need to be (and I’m sure the UK and other countries have their equivalents).

One thing which leaves a bitter taste in my mouth every time I encounter it however, is customer service, or lack thereof. Now, I should preface this point with the important fact of where in the country I live (Germans make much of the East-West divide, the so-called ‚Mauer im Kopf‘ or ‚Wall in the mind‘) – I live in the former communist side of the country. Perhaps the deficiency in the area of customer service is a particularly East German phenomenon, but I can’t remember being particularly overwhelmed with friendliness and service in Stuttgart during my time there either.

Walking through my local supermarket the other day and coming across the cheese counter, I asked if the lady serving me could make a suggestion as to what cheese I could buy that day. What I had expected was a friendly ‚Oh hello there! Well, my favourite cheese is this one here but I suppose it depends on what type you like – do you know whether you’d prefer mild or strong cheese?‘ (perhaps a bit over-friendly even by British standards, but a good enough guide as to what to expect). That, as I’m sure won’t surprise many of you, is not what I got. Instead I was confronted by a woman who, rather than wearing a gleeful smile, proud to be serving the good residents of the town, I instead was confronted by a lady who was about as cheerful and engaging as roadkill.

‚Well what type of cheese do you want? How am I supposed to know what you like?! Something I like might not be so much your thing!‘

Anyway, this perhaps seems a little petty and specific, though nevertheless it’s not a situation unique to me or to one single supermarket in one single town. Coupled with the fact that many shops and supermarkets ‚make do‘ with fewer than enough tills, stores with too few sales staff – and when you finally get served, having spent 15 minutes or so in line to pay for your products, you get a cold: ‚Hallo. €5.55. Paybackkarte?‘ As a ‚geschätzter Kunde‘, you have to pack your bags as quickly as possible and get out because the next 15 customers are behind you and desperate to get out of the hell hole that is a German supermarket.

Though you can’t really blame those unfortunate enough to work there that they’re in a bad mood. More people to serve means spending more money, whilst one could do the job – the customers will wait longer, they won’t shop anywhere else. More stress on the individual workers is probably what turned their milk of human kindness sour.

More importantly, it’s the good old theme of complacency that crops up here.

It is the way it is.

It’s not worth complaining about. Somehow, whilst supermarkets in the UK and USA are battling for market share on the basis of providing more for the customer to stay ahead of their competition, German companies are scraping the bottom of the barrel, trying to find every way possible to get more people through the door and out as quickly as possible, with total disregard for the customer experience. What are the social, economic, cultural, psychological (etc. etc.) reasons that lead to this attitude thriving in Germany and not in Britain? I haven’t a clue.

As for fixing the problem: it seems there is no way out. People continue to shop at their local supermarket because it’s the nearest place, so boycotting all unfriendly stores would require severely going out of your way in order to get some milk.

All I know is this: I’m going to buy my cheese in a packet from now on, and not from the cheese counter.

Note: Daniel has started his Christmas Season and he will return in the new year. 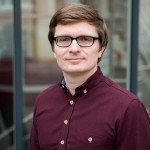